One from the Jollywise archives! Senior Designer Will Weaver writes about the importance of simplicity in creative thinking, and his love for Brian Eno.

The old aphorism 'Necessity is the mother of invention' came to mind recently when I was listening to Episode 38 of the Adam Buxton podcast, in which he interviews Brian Eno (for the second time; the first time being episode 37, continuity fans).

Whenever Brian Eno says something, gold falls out. Kind of like a sagacious and thoughtful alchematic raconteur. If he had a strapline, it would be 'More than a musician'. You may have gathered, I really really really like Brian Eno. During one of Adam's signature ramblechats, they talk about making verse-chorus-middle eight pop/rock songs and, with it, some lovely insight into creativity spills out of our demigod. I mean Brian.

Discussing an early period of his songwriting, in one concise statement he manages to reveal more about a certain part of the creative process than few wordy articles ever have:

‘Very early on when I started writing songs, thinking, if I make a decision never to use the personal pronoun 'I', never to use 'you' in the singular, or 'love'. I thought if I make a decision never to use any of those three words in a song, I would already be in a very tiny area which nobody has explored very much. So that's kind of the trick I think, is to say okay, there's one target – the love song – and everyone is shooting at it. What about if I invent another target?’ (Click here, skip to 15:00.)

Back to that classic old aphorism ‘Necessity is the mother of invention’. Difficult situations inspire ingenious solutions, and essentially what Eno wanted to do was set himself parameters that would force a unique outcome. Innovation by reduction. Parameters are a great creative starting point on any project - that's why interrogating the brief is such an important part of the design process: distilling the requirements of a project into a nutshell so time needn't be wasted in casting the creative net too wide. One nice little example of this is to ask the client what they’re not looking for, often weeding out some very specific details that otherwise may not get articulated until a much later stage where time has been burnt venturing down yet unknown dead ends. For example, “We hate purple. So as long as the interface isn’t purple, we’ll be happy”. Good to know.

What at first appear to be boundaries can quickly stimulate lateral thought. Eno's take on forcing a situation whereby constraint is actually a positive fuel – rather than a creatively stifling pot of old glue – is nice to hear from a sensible demigod. I mean, person. Whatever creative field you're in, it's just how you choose to do your version of it; to harness your own set of rules, whether it's a didactic approach like his or a more philosophical one – such as using the ethos of simplicity as a whole.

Simplicity as a design tool for making more by using less is something I believe all us designers strive to do, but in practice is very difficult to execute. Projects often require proof of existence by the volume of ideas, the complexities therein and the output created by them, and it's a struggle to counter the 'more stuff = better value' logic. However, to coin a mixed metaphor, there's always more than one way to get your cakes in a row, slice, then eat them.

I recalled another interview, with director Jonathan Glazer, talking about the process of working on total cinematic amazathon and best film-with-a-Hollywood-A-lister-driving-a-white-Transit-van-around-Glasgow, ever: Under the Skin.

Nicely put. His MO is to accept that things are complex. You start with a camel but strive to end up with a racehorse.

Today's takeaway, dear reader: yep, sometimes more is indeed more. But in whichever creative industry you work, simplicity wants to win, and the people at the top of their game will always find a way to let it. 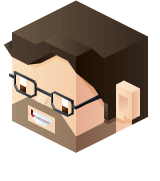 Will Weaver
Will is a Senior Designer at Jollywise. An advocate for simplicity, good typography and design which understands people, he’s also a big, big fan of chocolate – although it’s not the king of him.
Previous Post Next Post
Blog